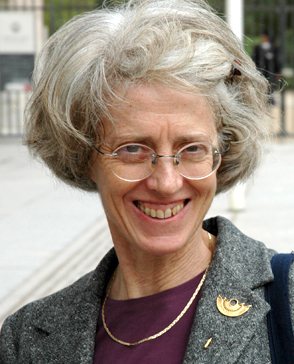 Trained as a physicist, Professor Francoise Vienot was introduced to the mysteries of colour science by Yves Le Grand and she has carried forward his distinguished tradition. Her early work was on colorimetry: she was especially concerned with individual differences in colour matches, before the topic had become as fashionable as it later became. Her mastery of colorimetry led her to the work for which she is best known in the wider world: she developed an algorithm for simulating for the normal eye the appearance of scenes for the dichromat. This algorithm has found many practical applications, including an application for the iPhone that allows the user in real time to inspect the world as it appears to a protanope or deuteranope. Professor Vienot has contributed to many other aspects of colour science. She has published historical research on the colour system of Chevreul. She has published a textbook on colour science, as well as important papers on Maxwell's spot and macular pigment, on mesopic photometry, on the perception of gloss, and on the Benham-Fechner colours. She has a talent to take applied problems and use them to inspire fundamental research. For most of her career, Francoise Vienot has been based at the Museum National d'Histoire Naturelle; and this has had interesting influences on her science. She is an expert on plant pigments and is an authority on horticultural colours. The Museum brought her into contact with ecologists, a collaboration that led to the first experimental paper on the fruit signals that trees present to their disseminators. For nearly 20 years, she has marshalled all her considerable tact, patience and precision to bring to its conclusion CIE Technical Committee 1-36, which has prepared a physiologically based system of colorimetry. To our own Society, and to the IRGCVD from which it evolved, she has been an active and loyal contributor since 1974.